Think about it for a second. Shoe companies have failed horribly at standardizing shoe sizes. My feet haven’t changed sizes in 20 years, at least, yet the shoes I have bought that fit range in size from “9” all the way to “10 1/2” – nevermind the fact that my Birkenstocks have always been size “40”, but I digress…

The point is that nobody in their right mind would think of purchasing a pair of shoes without first trying them on. Yet Zappos.com convinced people to do just that, and did it so well that Amazon bought the company for $1-billion. But there was a catch: CEO Tony Hsieh had to continue leading the company and try to preserve the quirky Zappos culture that made it so successful.

Customer Service is Everything

If you are going to sell shoes online, you have to anticipate that customers will only be willing to do so if the risk is extremely low. That means that returning shoes that don’t fit has to be as frictionless as possible. Thus, the secret to Zappos’ amazing success is the incredible customer service that is central to the company culture. If you want to learn more about how that all happened and gain insight into how you might be able to do the same, I strongly recommend Tony Hsieh’s book, Delivering Happiness: A Path to Profits, Passion, and Purpose – without a doubt, one of the top 10 business books I have ever read.

So what does buying shoes online have to do with Las Vegas?

Instead of following the rest of the startup scene in Northern California, early on Hsieh made the decision to locate the bulk of Zappos’ operations in the Las Vegas area. After years on the outskirts in nearby Henderson, a while back focus turned to a piece of real estate that Hsieh picked up for a relative bargain: the old Las Vegas City Hall.

From Sin City to Startup City

Over the course of a decade, I found myself working in the Las Vegas area several times a year on construction consulting projects. I was there during the boom and during the crash. In fact, it is safe to say that my clients were probably more to blame for the crash than anybody else. (Something I don’t feel very good about in retrospect, as you might imagine…)

The devastation to the economy in the Las Vegas area is hard to comprehend unless you have actually been inside the homes of the people that live and work there. Property values have plummeted, and jobs that pay a living wage are few and far between.

That’s where Tony Hsieh comes in. Investing much of his personal wealth into something called the Downtown Project, he is essentially trying to single-handedly transform the Vegas economy from tourism-focused to innovation-focused by creating an entrepreneurial sanctuary. In a recent feature on Gizmodo, Alissa Walker had the following to say after spending some time with the ever-approachable Mr. Hsieh:

I’m not gonna lie: It’s a lot like meeting Oz in his Emerald City…

Hsieh wrote a book about happiness, and, not surprisingly, he wants to bring that feeling to his development plans. “One of our principles for the Downtown Project is that we want there to be an ongoing sense of discovery, so you’ll go back to the same spot but find something new.” The bar Commonwealth has a disguised speakeasy, for example. Inspire has secret rooms and passageways. The hydrant at the dog park has a hidden lever that showers the sidewalk with water. “If you come back in six months, you’ll see a motel we’re converting to boutique shops, and this is what is going in the courtyard,” he says. On his phone, he shows me the Big Rig Jig, a 50-foot-tall, 25-ton art car by L.A.-based Mike Ross made from two tanker trucks that’s been to Burning Man and Coachella.

In another piece, Walker describes more of the business and civic benefits of the ambitious project:

But here’s where it gets tricky: Usually, in growing cities, new businesses would be able to move affordably into a vacated industrial area. Vegas doesn’t have those warehouses, factories, or any of that old building stock. Those vacant lots that checkerboard the landscape out Adams’ south-facing window? There was never anything there. It’s on the developers—and the Downtown Project—to truly start from scratch.

A lack of building stock, coupled with the economic collapse, means the city also has to work exceptionally hard on housing, something that Adams says is a current hot-button priority. “When you study the history, we skipped a market segment that other cities have come to embrace,” says Adams. Most cities have recently invested in mid-rise, mixed-use developments that are four to six stories. “During our white-hot years, we skipped that and went right to high-rise. The reason was, our construction costs and lands costs were so high because of what was going on on the Strip, you couldn’t make it work here.” There are still unfinished towers on the Strip, including an empty building that reportedly cost $1 billion. “Now construction costs have come down, land costs have come down, and now we’re seeing companies say it’s going to work…”

It makes sense now why the Downtown Project has so much civic support: It is an extension of what the city was working towards already. In a way, it’s functioning like an arm of the government, a high-level development agency, maybe.

I still am not a big fan of Las Vegas (it just isn’t my thing), but I am a huge fan of what Tony Hsieh is doing for the area. Kudos to him and kudos to the city leaders for taking the chance.

Maybe someday Vegas will be my kind of thing…

Links: Meeting Tony Hsieh, the Mayor of Downtown Las Vegas and Build For Locals and Tourists Will Come: Vegas’s Plan for Its Downtown 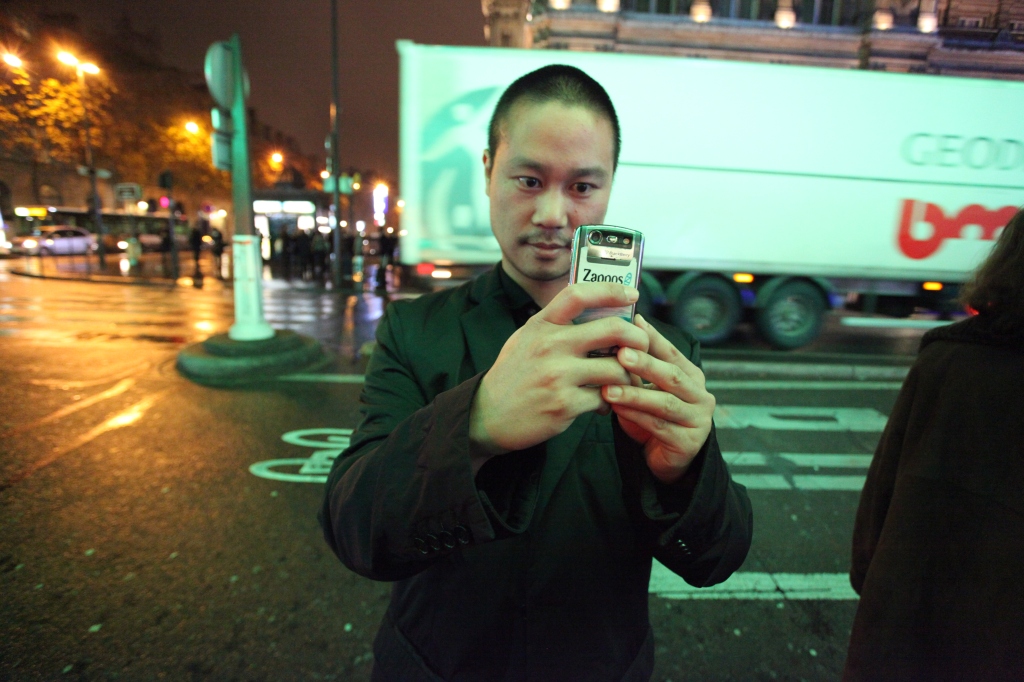