Inhabitat’s Kristine Lofgren reports that the order form and website for Tesla’s new solar roofing system is now live. In a previous article, Inhabitat had the following to say:

The seamless look of the new technology is thanks to “integrated front skirts and no visible mounting hardware” according to Tesla’s website. Electrek said these features come from Zep Solar, a mounting equipment company SolarCity acquired before Tesla’s acquisition. Zep Solar engineers designed the rail-less system Solar City employed to slash solar installation times in half.

Tesla says their panels “exceed industry standards for durability and lifespan” on their website. Panasonic will be manufacturing the exclusive panels at the Gigafactory 2 in Buffalo, New York. There aren’t many specifics available for the new solar panels yet, but Electrek said they will be 325-watt panels. They noted Panasonic sells other 325 watt panels, and those have a 25-year power output warranty and a 21.76 percent module efficiency.

If you visit Tesla’s website, you’ll find a very handy calculator that lets you estimate the cost of installing their new solar roof system. Here’s a sample calculation: 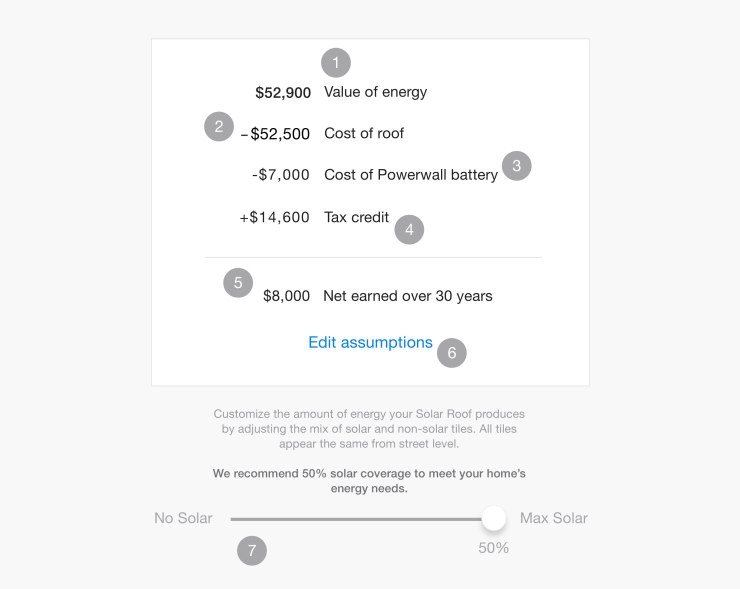 From a marketing perspective, I love how Tesla is shifting all the focus to the net benefit that an end-user receives. This is not at all unlike value-based fees for consulting services, a topic I’ve written about extensively.

Where else in the construction industry can one find pricing expressed in terms of the value delivered to the end user?

The riskiest aspects of any roofing work on an existing residential structure include the following:

A lot of the mitigation of those issues comes down to who will actually be installing the equipment. That topic is not addressed whatsoever on Tesla’s FAQs.

The real test of course will come once Tesla starts getting sued after their initial installations so that underlying liability coverage and contract language can be uncovered and examined more fully.